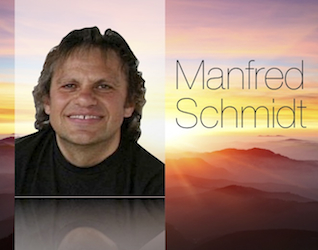 Manfred, Karl Schmidt was born on the 14th of June 1953 in Regensburg. As a young man he was already intensly seeking God and the meaning of life. He studied many religions and even got involved in drugs. His primarly fruitless search finally got rewarded through the intense prayer of his mother and a book by T.L. Osborn, by which he recognised that Jesus was the only way to God. In 1973 he gave his life to Jesus Christ and realized after a dramatical encounter with the Lord that he had instantly become free of drugs and experience physical healing. This experience and the strong awareness of being a completely new creation in Christ marked him for the rest of his life.
In the following four years as a marine, God equipped him through the study of books on the basis of the Bible. After that God put the desire in Manfred´s heart to reach the lost, especially young people, with the gospel. When he was 25 years old he traveled as the evangelist and musician named „Pilgrim“ throughout all of Germany and even beyond. He gave most of his gospel-concerts on cabaret stages, in tearooms and in churches and christian congregations. His ministry was accompanied by extraordinary miracles and healings. Manfred also helped found and establish several churches.
In this season of life Manfred got to know the situation of the church in Germany. He was quite disturbed by realizing that the many different streams and denominations had varying, often completely opposite doctrines. A burning desire arose in Manfred to lead the Body of Christ into unity and the many weak, with problems overloaded christians into freedom. That is why he started studying countless christian books and encountered in the Word and his spirit the confirmation of the fact that the unity of faith and the personal victory of every christian was only possible through the absolute Word of God.
For this reason and commissioned by the Lord in 1985, Manfred founded a book- and music store and a church in Regensburg, along with the publishing press Shalom. Manfred pursued the goal of the Lord to publish all the books of the authors that had blessed him so much with their gifts. This is when the publishing started with the first book „You are God´s best“ in German. T.L. and Daisy Osborn had given Manfred the authorization to publish all of their material in German, after they had been praying for a ministry to do this for 12 years.
In the following years, by the grace and favor of God, important authors like Kenneth and Gloria Copeland, Charles Capps and others were added to the list. When in 2000 the rights of the author E.W. Kenyon were given to an international ministry for the first time, a lifelong dream of Manfred had become reality and the vision of the Shalom publishers to bring revelation to their readers was strengthened.
Over the years Manfred himself wrote 22 books and minibooks. In the last years of his life he especially focused on reforming the Body of Christ by uncovering heresy and compromise in the church and explaining solutions following the slogan:“Reformation goes ahead of awakening“. He was also a songwriter and producer and added sound to many of his songs.
Manfred always pursued the goal to spread the uncompromising, absolute Word of God until his departure on the 27th of October 2010. Thanks to his enormous commitment, the publishing house Shalom has become the embodiment of excellent, absolute biblical material in the course of 25 years.
He followed his call, first as a musician and evangelist, then as a pastor and head of publishing, mentor, reformer and prophet and was in ministry for the Lord for 33 years.

We and many others will always keep Manfred in good memory.

We use cookies on our website. Some of them are essential for the operation of the site, while others help us to improve this site and the user experience (tracking cookies). You can decide for yourself whether you want to allow cookies or not. Please note that if you reject them, you may not be able to use all the functionalities of the site.